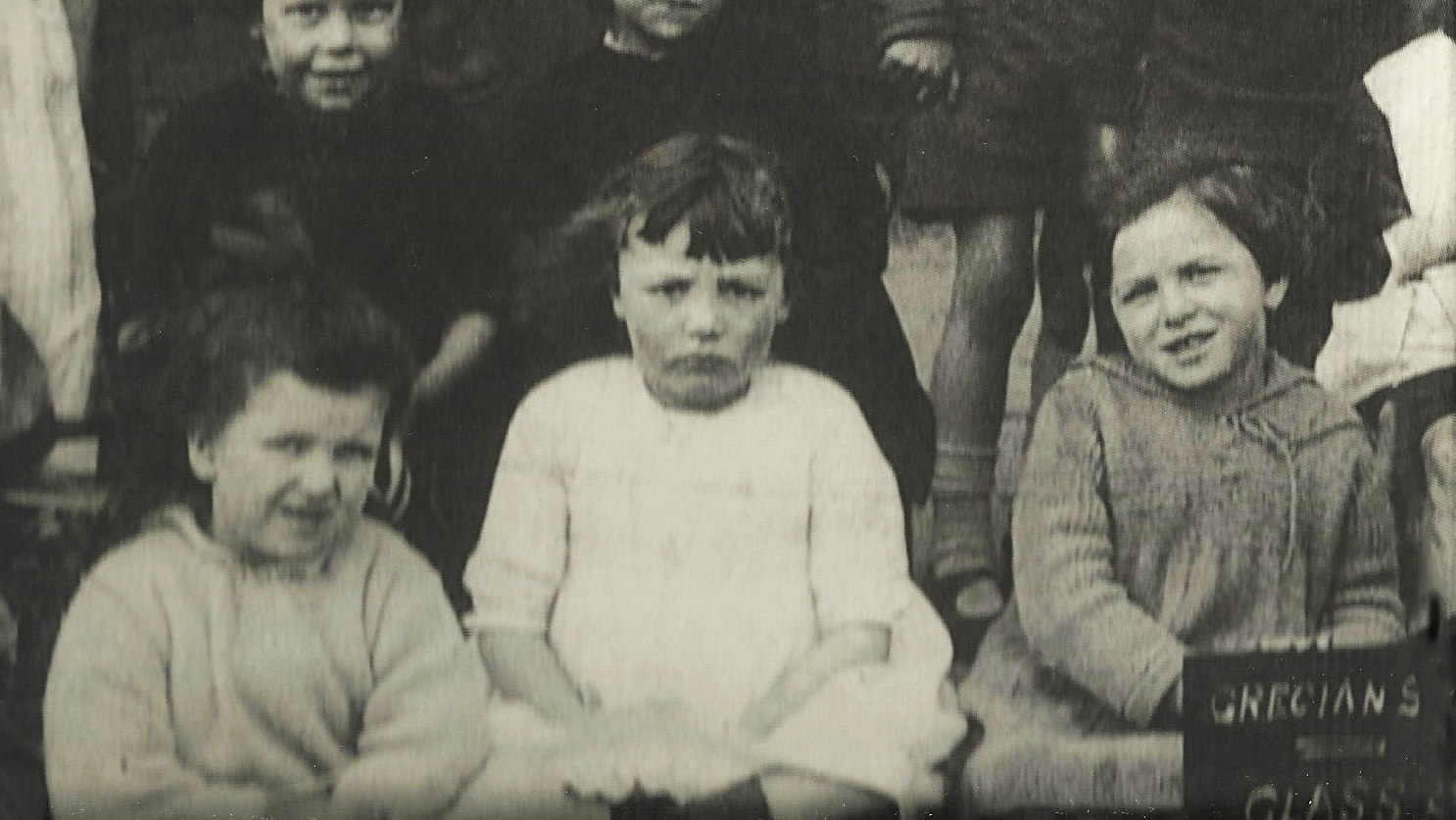 Leila (on the right) at school

I am the Bridesmaid. I stand on the table. Sidney’s mother is making me a pale-pink frock for Auntie Ettie’s wedding. I have to turn round very slowly, while she takes pins out of her mouth like fishbones and squeezes them into my frock.

I am turning round very very slowly like the girl on the music-box, standing on the window-sill.

The electric lights tinkle. I hear them like bells.

It is so big, this room. It is called The Assembly Rooms. Not Room. Rooms. Just one room is a rooms, because it is so big.

The music sways and curls and dances like the flame of the candle on Friday night. The floor is skiddy, slippery, slidey. I want to sing and shout. I slip my hand into Daddy’s, and lean against his knee and look upwards at him. I am so happy. I want to be happy with him.

He snatches his hand away and throws his look at me as if he is throwing a stone. He hates me! My heart stops beating. I am frozen inside. Auntie Ettie says ‘Oh look at her! You shouldn’t do that to her! She’s only three!’ Her voice is like a faraway train.

I went to the Fancy Dress Party. Everybody was dressed as shepherdesses and princesses and fairy godmothers. Everyone looked beautiful. I was the only letter-box. I don’t think their mothers made those costumes on the sewing machine. I don’t think you’re meant to do that. I think there’s a place where you get them. How do people know?

I don’t think anyone has ever come to a Fancy Dress Party as a letter-box before . . . But they must have done, or there wouldn’t be patterns . . . would there?

If you run fast right across the school playground, you run into the railings, and your body stops but your foot goes underneath, and the metal scrapes it and it bleeds. I try to do this every day.

It hurts quite a bit. If it bleeds into my black school stockings, will I get blood poisoning?

I like the stories about Orpheus. When he played his lyre, wild beasts would come softly out of the forest and stand bewitched.

I read them again last night. Even the rivers would stand still and listen.

On the wall in the surgery is a picture of a little girl with nothing on. She has taken off her red cloak and dropped it on the floor, and her bottom is lit up, and round and rosy in the firelight. And you can see she’s going to get into the big bed where there’s a wolf dressed up in a nightgown. I think it’s Little Red Ridinghood, but there’s nothing in the one I know about getting into bed with the wolf. This morning I asked Mammy about it. She said in some stories she does. She didn’t want to talk about it very much. Grown-ups never do want to talk about things you’re interested in. They don’t like you being interested in anything. And then they say ‘Why aren’t you interested in anything?’

I don’t like this picture. I don’t know why exactly.

I think children’s bottoms don’t belong to children; they belong to grown-ups.

My father is going to start a practice in London. He has taken a room in Queen Anne Street, off Harley Street (which is a very posh street, I know), and he is going to take the sleeper-train to London every week-end, going up on Friday and coming back on Sunday morning. On Friday night Fred said I should go up and get ready, and he’d come up in ten minutes. So I went up and washed, and my hair, and put on my clean pyjamas, and put some Yardley’s Orchis on the tips of my ears, and plumped up the pillows, and sat up against them, and smoothed out the sheet in front of me. And Fred came in and burst out laughing because I looked like Visiting Time in hospital. Well, I’d never done it before.

He was very gentle and careful, trying so softly to come in, and stroking me and kissing me, and licking my ear till I squealed because it was more than I could bear. And when at last he came inside me, it hurt for a second, one second only, and then some place inside me cried for him, cried to him. And he hovered above me like a bird, dipping into me, dipping, dipping, like a humming-bird, tasting me, flicking me, sipping me, dipping, dipping, until, at last, I slipped over the top . . . When I opened my eyes, he was lying beside me, propped up on one elbow, watching me. He smiled. He was very pleased. Proud of himself. In the morning we looked at the sheet. Searched. And there was only the tiniest little pinprick. Fred sits on the edge of the bath and I stand between his legs and he touches my soft dandelion clock, and begins to stroke me, fingering the wet cleft, circling me. I close my eyes and moan, till the earth rocks in my head and the room turns over, and I slide towards the floor. He laughs and holds me up. ‘But what is it like? What is it you feel? Tell me! what is it like?’

‘Somebody said it was a tickle.’

‘A tickle?’ he repeats, disappointed, unbelieving.

Fred has a sort of game he plays that really scares me. My father’s train gets into London Road station at seven in the morning. So we know, roughly, what time he will get here. And Fred, deliberately, stays later, and later. Ten to seven . . . Eight minutes to seven . . . Five to seven . . . Seven . . . When I say ‘Go! Go!’ he laughs at me. One day they will meet on the doorstep.

It must be the Irish in him.