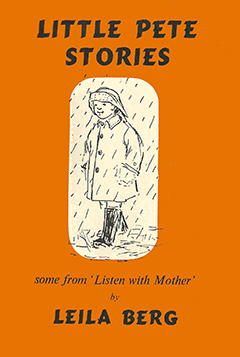 The Little Pete stories first came out in 1952 and were reprinted many times through the 50s and 60s. They hold the unique distinction of being, after the first story, thrown out of the new infants’ radio programme Listen With Mother on the BBC’s “Home Service” because seven listeners protested that they were shocking and anarchic (“he goes downstairs backwards!”) and that they didn’t pay their licence fee for Leila Berg to corrupt children.  Junior Bookshelf, a review magazine, kept talking about The Little Pete Stories as being “the best thing that came out of Listen With Mother”. Finally, exasperated, Leila wrote to them and said, “Yes, they did, fast!”

Pete and the Flowers 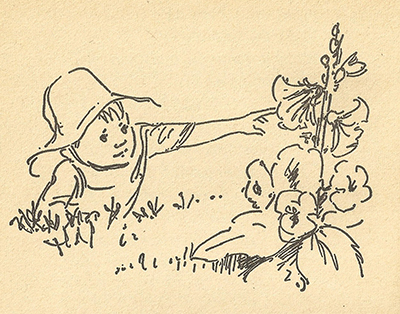 One day, Pete was walking along with only his shadow, when he saw a garden filled to bursting with flowers. They were every colour you could imagine, those flowers. Red and yellow and purple and orange and blue. And white too.There were so many of them that some were peering right out over the low hedge, and seemed to be saying to Pete: “Just look at me! Look!”

One of the flowers, a big nodding comfy-looking one, was looking right into Pete’s face. Very carefully he put out one finger and touched it. 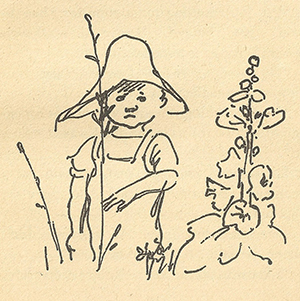 At that very second someone slammed up a window in the house with a big crash, and someone shouted: “Leave those flowers alone!”

Pete had a terrible fright. He snatched back his finger. Then he stood stock still, not moving at all. He thought he was going to cry.

But just then a side-door opened, and a man came down the path with a broom. He was surprised to see Pete with his face near the flowers. And when he came closer and saw Pete looked very upset, he stopped.

“What’s the matter?” said the man.

Pete said nothing for a minute. Then he said “She shouted, ‘Leave those flowers alone!’ She gave me a fright.”

“Do you mean you were picking our flowers?” said the man.

He stopped, and the man thought for a moment. Then the man said, “I’m sorry she shouted. I expect she didn’t know.”

“I know,” said the man. “You’re quite right. I never shout. But there’s one thing you ought to know – you shouldn’t say ‘she’ all the time. It isn’t nice. You should say ‘the lady in the house’.”

The man looked at the big purple flower that Pete liked so much. “Do you know what that’s called? he said. “It’s a hollyhock.”

“You said a lollipop, Pete insisted.

“I didn’t say anything of the kind,” argued the man.

“Well, what’s that flower over there, then?” said Pete. “The pinky one?”

“There! You said it again!” shouted Pete triumphantly.

The man sighed. Would you like to help me in the garden?” he said. “We could sweep up the leaves, and collect the weeds, and make a huge pile. And then we could light a fire.”

“Two fireworks then,” said Pete. “One for you and one for me.” 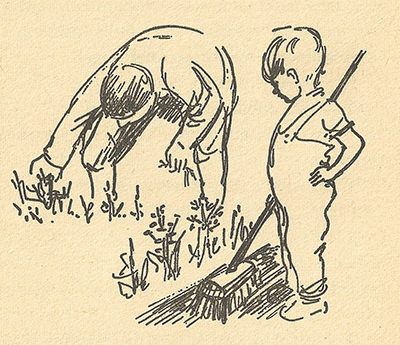 “No fireworks at all,” said the man.

“Well, only one firework, a teeny weeny one like this” – Pete put his finger and thumb together very tight to show how teeny.

“Look,” said the man, “this isn’t a Guy Fawkes fire. This is a fire-for-burning-garden-rubbish. I don’t generally have a fire at all this time of the year. I was doing it specially for you. If you hadn’t come along I wouldn’t be bothering about it at all. But, of course, if you’re going to go on and on and on about fireworks, then we’d better not have a fire.”

“All right, said Pete. “We’ll just have a fire. And we can have treacle toffeel”

“No!” said the man. And he was just going to say a whole lot more, but Pete said, not caring at all, “You don’t have to worry. I’m not going to make a fuss. What are you worrying about?”

So without saying another word, the man gave Pete his broom, and bent down to pick weeds.

“There’s one!” cried Pete. He was just starting to pull it up – a bunchy, green, grassy-looking thing it was – when the man grabbed his hand. “No,” cried the man. “That’s not a weed!”

“It’s just the same as the one you’re pulling up,” said Pete, rather upset.

“No it isn’t. Look, the leaves are different.” 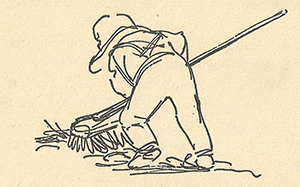 “I’m not doing anything of the kind,” said the man.

“Yes you are,” said Pete. “You shouted very loud when you said ‘No’ just now, and you said you didn’t ever shout, and you do, and you’ve given me a headache, and you won’t let me do anything!”

“Will you let me speak?” said the man. “Do you mind if I say something now?”

“All I was going to say,” said the man, “is that I was hoping you would sweep the leaves with my special broom, while I get on with the weeding.”

Pete thought for a moment. He was just going to argue a little, when the man said quickly: “It makes a lovely noise. A sort of swish, swish noise.”

“Doesn’t what?” said the man, with his face near the weeds.

“What are those big flowers called?” said Pete.

“Those are gladioli,” said the man.

“There, you said it again!” said Pete, delighted. 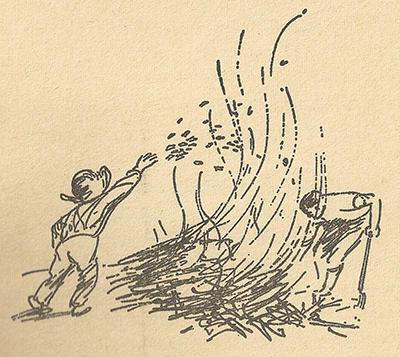 And Pete and the man laughed together, and felt very good friends.

Then they made a big heap of weeds and leaves, and they found some paper too. The man lit it very carefully, and let Pete blow out the match.

Then Pete put his hands in his pockets, two pockets in his trousers, and one in his shirt, and he took out all the bus tickets he had been saving for days and days. There were forty-seven of them. And he threw them all on the blazing fire.

If one fell to the ground in front of the fire, he left it there, not wanting to go too close to the fire, becuause the man said the fire was for burning the weeds and leaves, and not for burning Pete.

Pete’s shadow loved the fire. It danced up and down in the flickering light. Sometimes it crouched right down on the ground, by Pete’s feet, and sometimes it jumped right up like the tallest giant in the world.

How the fire smoked and crackled! And scarlet sparks rode up on the smoke half-way to the sky.

That was another good day.