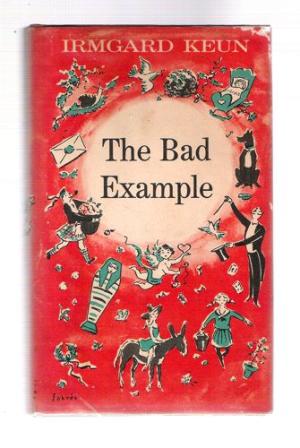 From the 1930s on the irrepressable Irmgard Keun (1905-1982) wrote a number of novels, based on her own life in post-WW1 and pre-WW2 Germany, with her dangerously anti-Nazi attitudes none-too-subtly on display. Her first books, Gigli, and The Artificial Silk Girl, which had been an instant sensation, were included in the infamous “burning of the books” in 1933. She managed to leave Germany in 1937, but subsequently faked her own suicide and returned there under another name in 1940, to live through the war in hiding, with her parents. She subsequently emigrated to the USA she continued writing, notably Child of All Nations, but where she apparently had alcohol and drug use issues and was hospitalised for some years. Short biographies are available here and here. Her fame or notoriety revived in the late seventies, and at least three of her books were republished in the UK. These were After Midnight, The Artificial Silk Girl, and Child of All Nations.

Leila – who didn’t speak German – worked on the translation of one of the books Irmgard Keun wrote while exiled in Amsterdam, called Grown-Ups Don’t Understand. It’s not clear who was the intended audience when written, but this book woud fit comfortably into the Young Adult genre if repubished, which – as a lost classic – it surely deserves to be.

Originally published in Amsterdam in German by Allert de Lange.

Translation published in UK as Grown-Ups Don’t Understand 1955 / in USA as The Bad Example by Harcourt and Brace, 1955.

Extract from Chapter “We Send A Letter To The Kaiser”

We’ve no time for playing now, Hans and me. We are going to do something very important, something that will make the grown-ups sit up. It is much more difficult for us now though, because of all this trouble with the new building.

Everyone is saying we flooded the new building, the Schweinwald children and Hans and Otto and me. But it would never have happened if the grownups hadn’t interfered again.

We always used to go around to the new building after the bricklayers had gone, because it was much more fun than a whole house. We weren’t supposed to, because we are never supposed to do anything really nice. We used to have fire practices there, because there is always a chance we might become firemen one day. It is a very noble profession. Everyone has to get out of your way. We shall tear through the street, and be heroes. Perhaps one day the war will be over, and Mr Kleinerz says a lot of things will be different then; it is not wise to make plans. But there will always be a fire department, that everyone respects, and that gets medals. And people say there’ll always be fires, even when there isn’t a war. Fires are wonderful. And putting them out is fun too.

We generally used to make the smallest of the Schweinwald children sit downstairs in the new building, so that we could rescue them at peril of our lives. Hans and I were the captains, and we climbed all over the highest planks and clambered up and down ropes, and shouted out, “Come on, my faithful comrades! Old women and children first!”

Kate Schweinwald was a very old lady and she had to be wrapped up in the horse blanket that was left behind when we had soldiers billeted with us. We couldn’t give the blanket back, because the soldiers had left for the front already, and we don’t get wool nowadays. The blanket is really military property, and my father is not to know about it, and really I’m not supposed to play with it because my mother wants to have it dyed blue so that she can make a coat out of it. But I need the blanket for saving the old lady. We had to have a blanket to jump into too. Otto’s bedspread was the largest thing we’d got. Funny –perfectly ordinary quicklime made a big hole in it. Quicklime is just like fire. We had no idea.

We used to have copper pans at home, but they made cannons out of them. So Hans and I had to wear ordinary grey enamel pans for our helmets.

It was lovely when they put proper water faucets in the new building. Then we could really put fires out. Alois Schweinwald can’t bear cold water and he used to scream just as if there was a real fire. It was wonderful. And everything would have been perfectly all right if some men hadn’t suddenly shouted from outside, :What are you doing there? Come out or there!” Hans lost his helmet fleeing madly, and my mother needed it to boil vegetables in next day. And Kate Schweinwald and I fell in some wet mud. But we all escaped in the end, the old people and the children as well.

It was a Sunday. We had to go to church and we all had a spanking. And Professor Lachs read us something from the newspaper about a good dutiful boy who brought nothing but joy to his parents. This boy wrote a letter to the Kaiser about duty and industry. His majesty was very pleased and he sent the boy a pony. A real live pony, imagine! Professor Lachs is always saying that the newspaper is an excellent educational influence.