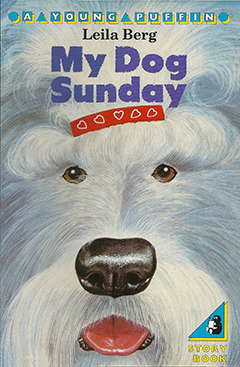 My Dog Sunday starts with a young Londoner trying to get a dog from the famous Dogs’ Home in Battersea, which gets stray dogs re-homed rather than “put down”. But it’s not that easy… he does end up with a new and very shaggy friend though.

I’m afraid you are too young,” said the lady firmly, and that was that. Ben had to leave the Dog’s Home without any dog at all, not even an imaginary one like Kathy had.

He didn’t even look at Kathy, he felt so bad. They just trudged off to the park – Ben, Kathy, and little Jimmy and no dog – same as always but more miserable because now they had nothing to look forward to.

Later, up in the tree-house, Ben caught sight of a strange, shaggy animal galloping through the trees. From all those dog books he’d had from the library, he knew it was an old English sheepdog and that it would run about with them and roll and lick them, and do everything that he had always wanted a dog of his own to do. It would even give little Jimmy rides, and in the evening it would come home with him to live…

My Dog Sunday was also published in paperback as a Young Puffin by Penguin in 1979, with illustrations by Peter Edwards.

Leila’s family had a gorgeous and much-loved Old English Sheepdog called Fred, living with them for years at the house on Streatham Common.